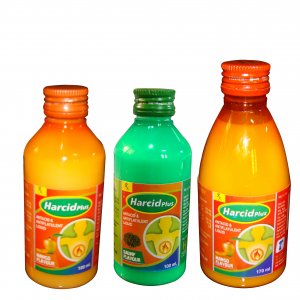 Two tablespoonful 3-4 times a day or as directed by the physician.
Presantation :

Aluminium/magnesium/simethicone suspension is an antacid and antiflatulent. It works by neutralizing acid in the stomach. It also causes the gas produced by some foods to remain dissolved, allowing it to be passed through the system more comfortably.

How to use aluminium/ magnesium/ simethicone suspension:

Use aluminium/magnesium/simethicone suspension as directed by your doctor. Check the label on the medicine for exact dosing instructions.

If you miss a dose of aluminium/magnesium/simethicone suspension and you are taking it regularly, take it as soon as possible. If it is almost time for your next dose, skip the missed dose and go back to your regular dosing schedule. Do not take 2 doses at once.

HARCID MPS is a drug with soft and prolonged antacid action. It is a balanced gel containing aluminium and magnesium hydroxide in combination with the ant flatulent agent simethicone. Its action is determined by antacid, adsorption, detergent and citoprotective properties of the active substances including in its composition. HARCID MPS has a rapid effect, neutralizes the increased hydrochloric acid and pepsin secretion in the stomach, and helps the recovery process by its favourable effect on the protective mechanism of gastro-duodenal mucosa.

Aluminium ion, containing in the preparation increases the tonus of the lower oesophageal sphincter, adsorbs pepsin, bile acids and lysolecitine. This explains its effectiveness in the treatment and prophylaxis of the reflux pathology. The alkaline components in the preparation are finely dispersed, which increases their active surface, a better contact with gastric and duodenal mucosa is 2 realized, the evacuation of the stomach content is retarded, which prolongs the neutralisation effect. The included in its composition simethicone provokes a narrow release and resorption of gas through the intestine walls. It is eliminated from the organism unchanged.

Gastrointestinal disorders, manifested with hyper- or normoacidity and increased gas production in the intestines. May be administered as monotherapy or in combination for the treatment of: