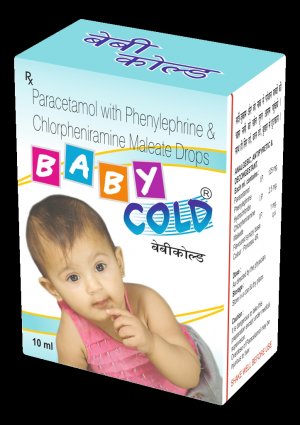 BABYCOLD drops contains an analgesic-antipyretic Paracetamol with decongestant Phenylephrine and antihistamine Chlorpheniramine Maleate. Paracetamol is a para-aminophenol derivative, produces antipyresis by acting on the hypothalamic heat regulating center and analgesia by elevating the pain threshold. Phenylephrine Hydrochloride is a selective α1-adrenergic receptor agonist used primarily as a decongestant. Chlorpheniramine Maleate an alkylamine derivative is anti-histaminic that causes moderate degree of sedation.

MECHANISM OF ACTION:
Paracetamol works by blocking the action of a substance in the body called cyclo-oxygenase. Cyclo-oxygenase is involved in the production of prostaglandins (chemicals in the body) which cause pain, swelling and inflammation. Phenylephrine constricts the blood vessels in the nasal mucous membranes and allows the air passages to open up. The majority of the sympathomimetic action is due to direct stimulation of the adrenoceptors. Chlorpheniramine Maleate has sedative & anti-cholinergic actions, but lack selectivity for the cough centre.

INDICATIONS:
Common cold and fever
Relief of nasal and sinus congestion
Relief of allergic symptoms of the nose or throat due to upper respiratory tract allergies
Relief of sinus pain and headache
Adjunct with antibacterial in sinusitis, tonsillitis, and otitis media

CONTRAINDICATIONS:
Hypersensitivity to any ingredient of the product.

DOSAGE:
As directed by the physician.

CAUTION:
Overdosage of paracetamol can cause liver damage.

STORAGE:
Keep away from children.
Store in a cool, dry place. Protect from light.

Paracetamol:
Paracetamol is an effective analgesic-antipyretic (relieves mild to moderate pain) and a weak anti-inflammatory agent.
Absorption: It is readily absorbed from the g.i. tract with peak plasma concentrations occurring about 10 to 60 min. after oral administration.
Distribution: It is distributed into most body tissues.
Elimination: Approximately 80% of acetaminophen is excreted in the urine after conjugation and about 3% is excreted unchanged.
Half Life: 1 to 4 hours.

Route of Elimination: Phenylephrine and its metabolites are mainly excreted in urine.
Half life: 2.1 to 3.4 hours.

Drug Interactions:
The following class of drugs if co-administered with the medication may cause severe drug interactions: - Anti-depressants, sympathomimetic agents(epinephrine), Anaesthetics (halothane), adrenergic-blocking agent (e.g., Phenothiazine drugs) and any other drug containing acetaminophen.

Side Effects:
Paracetamol has low incidences of side effects. Skin rash and minor stomach and intestinal disturbances may occur.
Cholrpheniramine Maleate may cause sleepiness and drowsiness.
Phenylephrine HCL may cause tremor, restlessness or anxiety.

Precautions:
Avoid alcoholic drinks during the usage of this medication.

*** This information is only for Reference There is no Clinical Proof Available. ***