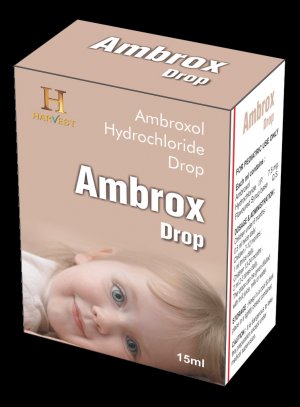 Ambroxol is a metabolite of Bromhexine. It possesses mucokinetic (improvement in mucus transport) and secretolytic (liquefies secretions) properties. Ambroxol stimulates the serous cells of the glands of the mucous membrane of bronchi, increasing the content of mucus secretion. The mucolytic effect is associated with depolymerization and splitting of mucoproteins and mucopolysaccharide fibres, which leads to reduction in the viscosity of mucus. Expectoration of mucus is facilitated and breathing is eased considerably. Ambroxol stimulates production of phospholipids of surfactant by alveolar cells. Ambroxol has anti-inflammatory properties. In patients with COPD, it improves airway patency. Beside these, Ambroxol also exhibits anti-oxidant activity. Long-term use is possible because of the good tolerability of the preparation.

The drops can be given diluted with fruit juice,

Ambroxol should be given cautiously to patients with gastric and duodenal ulceration or convulsive disorders. Patients with hepatic and renal insufficiency should take it with caution.

Contraindicated in known hypersensitivity to Ambroxol or Bromhexine.

Ambroxol has no interaction with cardioactive glycosides, corticosteroids, bronchodilators, diuretics and antibiotics (normally used in the treatment of bronchopulmonary affections). But Ambroxol should not be taken simultaneously with antitussives (e.g. Codeine) because mucus, which has been liquefied by Ambroxol, might not be expectorated.